Mr. Russ worked of Counsel to the Floyd Law Firm, P.C. and served as a valuable resource in many aspects of the firm's practice. A friend and wonderful colleague, he will be greatly missed. 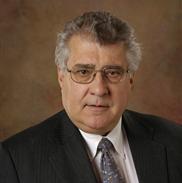